Edgar K. Southward whose soul-name is Rani is a Metaphysical Practitioner who considers himself an extraterrestrial who chose to be born on this planet at this time while inhabiting a mortal body. This is his thirty-third sojourn on earth from his home-world of Avalon, home of the Melchizedek teachers. He is here on behalf of our Creator Jesus as he has done in several previous past lives.

Once again Rani chose to be born on this bound world. Bound and isolated from the rest of the universe as a result of a treasonous rebellion by its Planetary Prince. Prince Calagastia took it upon himself along with Lucifer and Satan to usurp this and other worlds from their Creator.  In this incarnation, Rani began to question many of his religious teachers because he inherently suspected there was more to life than what they spouted.

He has never had, nor will he ever have any innate psychic ability, that is why he requires a gifted clairvoyant seer by his side to guide and advise him on his correct path while in mortality on this bound world. It was not until 1985 when Rani met that genuinely gifted psychic he had sought, Magna. At last, he learned who he was and why they were here on the planet at this time.

Rani was born in 1933, and even as a young child, he suspected there was more to life than just living here on earth. Therefore, during his past 88 years, he has delved into many aspects of metaphysics, and e did extensive research into the occult, not the stargazing astrologers, tea-leaf or tarot card readers, crystal gazing fortunetellers, or the witchcraft type of mysticism, but serious study of the unknown. While attempting to implement certain aspects of the research, Rani quickly realized that he had no innate supernatural talents. Thus he began looking for people with unique gifts of astral projection, psychometry, telepathy, and clairvoyance of whom he found many. Unfortunately, most misused their talents for financial rather than spiritual gain.

Finally, in 1985, Rani met Magna, a genuinely gifted psychic he had sought. However, he did not know this at the time because she had not mentioned attending the Institute of Vedic Studies. He knew she possessed many talents, but it took several months before realizing she was adept at more psychic abilities than he knew existed. Magna is a master  psychic clairvoyant seer who expanded her astral travel talents to traverse time/space while maintaining contact with Rani, who recorded their conversations while discussing everything she saw and heard.

They were living in a remote area in Arizona's Mojave Desert in 1987 when Abaris made his first contact with them.  He is a master Melchizedek teacher whose home-world is also Avalon. He is a spirit being who provided them with knowledge of universal importance to everyone on the planet. Information that few people have ever heard; that is unless you are a reader of the Urantia book.

As Abaris increased his teaching sessions with them, she expanded and refined her psychic abilities. They asked him many questions during their learning sessions, and to ensure they received the best answers possible; Abaris provided many diversified spirit-beings to speak with them. These spirit-beings traveled great intergalactic distances to share their divine knowledge and experience. They were experts within their specialized fields and freely shared their knowledge with them and bestowed them with gifts of celestial knowledge that can only come from beyond this planet’s mortal realm. Not many Spirit-being speak English, however one of  Magna's many extraordinary gifts was the ability to converse directly with them and to translate their universal language. That made it possible for us to record many hours of audio tape recordings that we freely share with all who wish to obtain celestial knowledge..

Rani established the Universal Brotherhood Educational Center in March 1987. Those of us at the UBEC freely dedicate our time to sharing our knowledge of the greater universe. Since the demise of our clairvoyant seer in September 2013, we are no longer able to garner more, so we are making what we have freely available to share with all who are interested in gaining divine knowledge and enlightenment.

Most religious people should have heard of Machiventa Melchizedek because he is mentioned several times in the Bible.
The Melchizedek teachers are the primary purveyors of universal knowledge within the seventh super universe. Their home-world is Avalon, which is adjacent to and closely allied with the Pleiades, home-world of Yasu who is also a Master  Melchizedek teacher. (His mortal given name was, Joshua Ben Joseph.)
The many Melchizedek teachers who conversed with us conveyed a great deal of celestially divine information. In response to their seraphic request that we share this knowledge with all who desire to learn, Rani dedicates his time to share all that we have learned.
I have been a member of the Universal Life Church since 1982 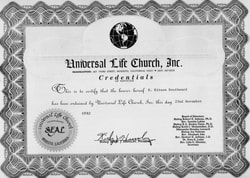 If you have any spiritual or metaphysical questions, send them directly to Rani via the Contact Form
Return Home